These are currently all the Easter eggs and references to other media found in RAGE.

This is a rare bobblehead of the NBA player Blake Griffin. It is located on Mayor Redstone's desk in Subway Town.

Tuco's grill can be found on a shelf in Sheriff Black's office. This is a reference to Hank keeping the grill as a trophy. This is likely because RAGE had been featured on the show; Jesse Pinkman can be seen playing the game on several occasions, albeit (incorrectly) with a light gun.

It should be noted that the actor that voices Gabe, Matt Jones, also plays a character named Badger on Breaking Bad.

Charon is the name of the character who brings the protagonist back and forth from Subway Town and Wellspring. In Greek mythology, Charon is the ferry man who brought souls of the departed back and to Hades across the river Styx.

Several walls in RAGE have graffiti on them that is actually concept art from id Software's earlier games. The pictured graffiti depicts a Spiderdemon, or Arachnotron from the DOOM series.

When upgraded with its heaviest armor, the Monarch resembles the "Monster", an armor-plated race car driven by Jason Statham in the 2008 movie Death Race. As well as general design, the cars both feature a similar red and black paint scheme.

The secret Developer Graffiti room is located at the Abandoned Distillery, not far from Subway Town. Explore this hidden chamber to get the "Dev Graffiti" Achievement/Trophy.

Note that an autograph from "Cacodemon" can be found among the various graffiti within this room. This is referencing the Cacodemon monster from the Doom series. 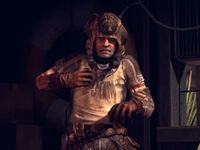 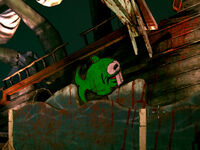 This Easter egg is located at the Mutant Bash last arena. The player has to shoot three lights and then a dopefish pops up; shoot that three time as it appears from behind the painted waves to gain bonus money. See video here, and note that this also makes earning the "Bringin' Home the Bacon" Achievement/Trophy much easier.

This fish is dopefish, a popular Easter egg in id Software games. Created by Tom Hall, one of the co-founders, and first introduced in the Commander Keen game, it has made quite a few appearances over the years in games from several developers, including Wolfenstein 3D, Quake, Anachronox, Max Payne, and Hitman 2. It is mostly used as an Easter egg, generally in a secret area.

In Subway Town an Authority guard can be found standing next to a can. Approaching him will cause him to give an order to the protagonist: "Pick up that can!" After the player picks the can up the Authority guard will say, "That's a good boy". This is a reference to Half-Life 2 where a Civil Protection officer tells the players to do the same thing.

In the Dead City there is a old news van labeled Hexinews 6. This is a reference to Hexen, a game developed by Raven software and published by id Software using the DOOM engine.

In the beginning of the quest "Defibrillator Upgrade" just before the entrance to Dead City there is a room full of slimed corpses. One of the corpses is a nude female in the standing position with her arms attached to a pillar behind her, a reference to women caputured by aliens that Duke must rescue that are often held in a similar position.

In addition to the obvious post-apocalyptic wasteland setting and Vehicle Combat, there are several items in the game which pay homage to the Mad Max films. 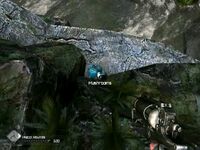 A patch of blue mushrooms can be found in the Hagar Caves that when acquired, will cause the player's screen to flash multiple colors.  This is likely a reference to hallucinogenic mushrooms and drug culture.

This may also be a reference to Fable and Fable the Lost Chapters which contain a mission to recover Blue Mushrooms for a witch to make an antidote for a young boy who has eaten the same Blue Mushrooms.

They are located in the room with the TNT detonator.

These are an homage to "Twinkies" snack cakes which, according to urban legend, are (incorrectly) said to have an infinite shelf life and thus presumably would still be edible in a post-apocalyptic future. It is also a nod to the original Doom enemy, the Demon, popularly nicknamed "Pinky", due to its coloration; a cartoon monster resembling the Pinky Demon's Doom 3 incarnation can be seen on the front of the box. When picked up, the sound file of a Demon snarling can be heard.

In the "Second Chance" bar in Wellspring, there are some signs that read "Rexsor Motor Oil". As the signs are green and have a dinosaur on them, they are likely a reference to Sinclair Motor Oil[citation needed].

Possibly, the bathroom graffiti could instead be a reference to the game Prey, which features the main character Tommy and his girlfriend Jenny, Prey opens with the main character in a bathroom thinking about his relationship. The rights to Prey were transferred to Bethesda Softworks and Id Software parent company ZeniMax Media before Rage was released. The game itself also ran on ID Tech 4.

In this video clip  from Dr. Kvasir's lab (RAGE), you can see the animation that occurs when the mechanical arms retrieve the item from the table. The left arm will attempt to grab the item from the right arm's grasp, a slight struggle will ensue, but the right arm will always retrieve the item for the doctor. The left arm will drop itself downward as if to express sorrow at its own defeat. This is an unconfirmed reference, but the similar animations make this an extremely likely nod by the animators to a favorite moment from The Darkness.

The secret Wolfenstein room is located in the Ghost Hideout. Follow the steps in this video.

The Wolf Goblet collectible can be found in the secret room.