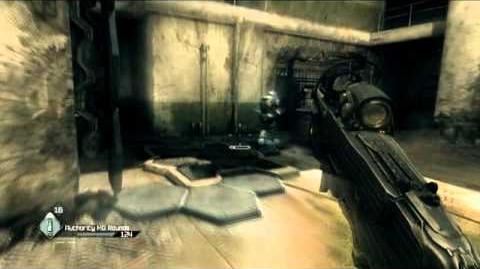 Electromagnetic Pulse Grenades, or EMP Grenades for short, are the quick-use items featured in RAGE. It's a type of hi-tech throwing weapon and an engineering item. It's also one of the left vehicle quick-use items in the multiplayer mode Road Rage.

The EMP Grenades appear to be sophisticated devices created after 99942 Apophis hit. Made with the use of Feltrite-based ingredients, the EMP Grenades are effective against the advanced technology of the new world, as well as the still functioning electrical devices of the old world.

The EMP Grenades are very useful when going up against the Authority, as most of the Authority troops wear power armor with inadequate electromagnetic shielding, and some have energy shields to protect themselves. An EMP Grenade can be used to disable the energy shield, making them vulnerable to damage. It is also used to disable power cores, which causes laser grids to shut down so that Nicholas Raine can pass them.

The EMP Grenade schematic is found in the side room near the entrance of the Authority Prison, along with some grenades. The ingredients required are:

Sitting on a table
Deutsch
Community content is available under CC-BY-SA unless otherwise noted.
Advertisement