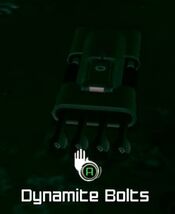 The Dynamite Bolts are an ammunition type and an engineering item featured in RAGE. They are used with the Striker Crossbow. These bolts are created via the corresponding schematic and also found in a few locations throughout the Wasteland.

When fired, they lodge in the target and explode after a few seconds, dealing massive damage. When hit, earlier enemies (most bandits except for the Jackals) will flail helplessly rather than continue attacking. Although they won't panic, massive armored enemies will be stunned by the explosion.

Enemy AI appears to treat explosive bolts that miss as if they were grenades, meaning even a missed shot can send enemies running for cover.

The schematic is available for purchase from "Outfitters" in Wellspring after completing the quest "Hijacked Well". The ingredients required are:

An Elite taking a bolt to the head