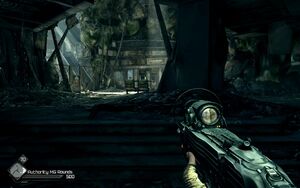 The Dead City Central is a location featured in RAGE. It is a part of the Dead City and is only accessible during the certain quest events, and traveling to the Dead City in between the two.

It is first available after receiving the quest "Defibrillator Upgrade" from Antonin Kvasir. It is inhabited by mutants at first, but later the Authority troops are found there during the quest "Lost Research Data". After completing this quest, the Dead City Central and Dead City in general are no longer accessible.

Should one choose to return here upon completion of the quest "Defibrillator Upgrade," the area will be repopulated with grunt mutants and mutant loot caches, thereby providing an ample source of crafting ingredients and ammunition.

The city central section is made up of the ruins of many business buildings, apartments, and a shopping mall.

A Duke Nukem 3D reference can be found here. A female abductee statue is located by the pillar to the immediate left when facing away from the doors to Dead City Streets.