RAGE Wiki
Register
Don't have an account?
Sign In
Advertisement
in: Characters in RAGE, Residents of Wellspring
English

Nothing is known of Dallas' early life. He is a resident of Wellspring, and can often be found inside the Second Chance bar.

In 2135, when Nicholas Raine arrives in Wellspring, he can encounter Dallas inside the Second Chance bar. Dallas can often be found spending his time alongside Jacob and Richard, or sometimes with Aiden while reading a DOOM comic book.

He has no significant interactions with Nicholas. 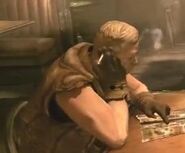