Shotgun Extender
The Combat Shotgun is an effective short range weapon with a slow rate of fire featured in RAGE. The shotgun uses three types of ammunition. This weapon is obtained upon completing the quest "Radio Tower Repair".In RAGE 2 the weapon is acquired during a mission for John Marshall. It functions differently from the Combat Shotgun from RAGE having two different mode of fire.

This weapon is used by virtually every faction in the entire game; even the Authority Shield Guards use this weapon loaded with pulse slugs.

Unlike the Double Barrel Shotgun[1] which fires two rounds per shot, the Combat Shotgun only fires one round per shot. Upon reloading the weapon the protagonist enters the shells manually, refilling two shells at a time.

The only upgrade available for the Combat Shotgun is the Shotgun Extender. It adds a box magazine for faster reloading. It is available for purchase for $250 from Coffer's "Outfitters" in Wellspring and from "Jani's Supplies" in Subway Town later on.

The Combat Shotgun is your go-to weapon for close quarter engagements, ideal for blasting mutants and bandits alike. This weapon is acquired from Rikter Outrigger as a reward for fixing the Radio Tower. The shotgun fires automatically by simply holding down the trigger. However, due to the intense recoil, it's best to let the weapon settle before firing a follow-up shot. In its standard configuration, the Combat Shotgun is fed by an internal tube magazine that must be loaded two shells at a time, making for some intense moments when you are swarmed by mutants. Purchase the Shotgun Extender - a box magazine with an 8-shell capacity- as soon as possible. Swapping out magazines is much faster than loading the weapon one shell at a time.

There are three different types of ammo available for the Combat Shotgun. The standard Buckshot is the cheapest and most common, ideal for taking out unarmored targets at close range - there is no better ammo for taking out mutants and charging bandits. Pulse Shot is a highly specialized round fitted with a small Electro Magnetic Pulse (EMP) charge. These rounds are great for targeting sensitive electronics, such as those found in Sentry Bots or the energy shields carried by some enforcers. However, they don't produce enough EMP to take out Authority generators - you'll need EMP grenades to do that. Pop Rockets are another specialized ammo, essentially converting the weapon into a grenade launcher. These explosive rounds detonate upon contact with any target or surface, capable of vaporizing most enemies and leaving nothing behind but a red mist. They make for an excellent, cost-effective munition against bigger enemies.

The Combat Shotgun returns from the first game in Rage 2, but is now pump-action instead of semi-auto. It's alt fire turns its shot into a concussion slug when you aim down sights, so players can choose between close range power or mid range precision.

Walker fighting the Authority with the combat shotgun in RAGE 2 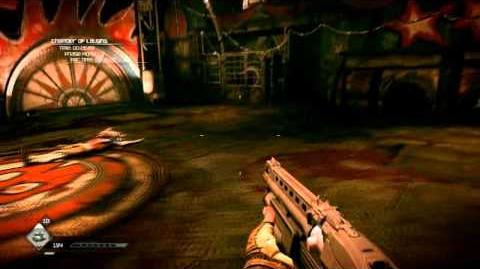