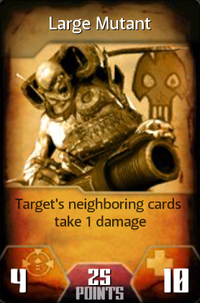 Large Mutant is one of the 54 Collector Cards in RAGE to be played in the minigame Rage Frenzy.

Note that you must get it before leaving Dead City Central the second time (during Lost Research Data).

The card is found in Dead City during the quest "Defibrillator Upgrade". The player will need a RC Bomb Car to get this card.

After surviving the mutant attack in the boarded up room, the protagonist will cross outside to the next building. A number of mutants will attack, and one of them can be noticed leaving a pipe entrance. After defeating the mutants, the player should send a bomb car through the pipe and use it to blow up the canisters and wood blocking the door.

To the left of the tunnel are some stairs that lead up. The player should move past the Kola-Kong machine and turn left, heading down the stairs and through the fiery doorway. The card is sitting on top of a red tool chest.

There is another possible way this collector card can be accessed, however it cannot be accessed normally through the standard campaign. You must either have the Sewers DLC or Scorches DLC (or both), however it is still unknown how the cards appear or why. In the Outfitters shop, the card will be available (along with the Janus Collector Card), though it is unknown if the other vendors will also sell it.