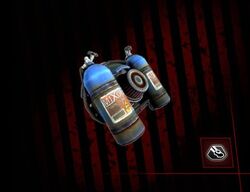 The Boost Restore is a power drop and vehicle quick-use item featured in RAGE. It can be bought from vendors, found randomly and in set locations on racing tracks in the Campaign and are unlocked as a left quick-use item at level 18 in Road Rage.

They completely restore the player vehicle's Boost power in both the Campaign when picked up and in Road Rage when used.

During Vehicle Combat in the Campaign, they drop after destroying an enemy vehicle. This is random, so the player should consider being prepared to handle any other oppression they might face instead of relying on these to save them from being destroyed. When racing, the player can use the restores to gain and/or keep the lead, or beat the clock depending on the race type.

In Road Rage, the Boost Restore may be used either to escape from an enemy or to gain on an enemy. When an enemy vehicle is about escape a chase, the player can use this to finalize their effort. When attempting to escape, the player should consider using something that could launch them into the air, such as a ramp on Meteor and Gearhead Valley maps. The player can use these to get into the air and turn their vehicle around. They should then use their initial Boost to go as far as possible in the opposite direction, and then use Boost Restore to replenish lost Boost power quickly.