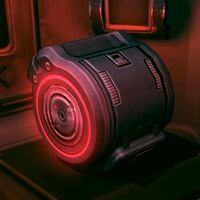 The BFG Rounds are an ammunition type featured in RAGE. They are used with the Authority Pulse Cannon. Their use requires a brief charge of 2-3 seconds before the discharge that deals a heavy splash damage. One round costs $191 ($190 with the Wastelander or Crimson Elite[1] armor), making it the most damaging ammo type in the game both to the enemies and the player's wallet.

When using this type of ammo, the APC can only hold one round in the magazine. Like the Pulse Cannon itself, these rounds are only available in the very late stages of the game. Right after the weapon is acquired, Jani will start selling the ammo in her "Jani's Supplies" in Subway Town, and there will be a couple of BFG Rounds in the enemy territory later on.