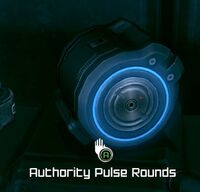 The Authority Pulse Rounds are the default ammunition type used by the Authority Pulse Cannon in RAGE. It produces bursts of energy bolts that quickly pepper the enemies. The big pulse round magazines have the largest capacity of all the other weapons' ammo types, 999 rounds; it is as much ammo of one type as the protagonist can carry.

With this ammunition, the APC fires like a Minigun and can quickly take down any enemy. Unlike when using the APC's second ammo type, the BFG Rounds, there is no 2-3 seconds period between the press of the trigger and the shot made. Still, a split second is needed to start the barrels' rotation.

Like the Pulse Cannon itself, the Pulse Rounds are only available in the very late stages of the game. Right after the weapon is acquired, Jani will start selling the ammo in her "Jani's Supplies" in Subway Town, and there will be a few stashes containing some Pulse Rounds in Capital Prime.