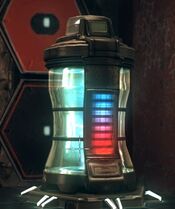 Authority Mobile Generators, also known as Power Supply Units, or Power Generators, are the sophisticated power units featured in RAGE. Those generators are used by the Authority forces, mainly as the energy sources for peripheral bases.

The Power Supplies are apparently used as recharging stations that refill the Authority soldiers energy meters before the fight. They also power the laser grids that let the Authority troops pass but will stop any trespasser at once. Also they used to power the Sentry Turrets used to defend certain locations. Without a Power Supply any laser grid or turret would be rendered inoperative, making it possible for an intruder to pass freely.

The Power Supplies are armored but still destructible. Typically it will take about ten hits, or a magazine of Steel AR Rounds, or about half a dozen Steel-tipped Bolts to destroy one. EMP Grenades and ammo are especially effective, as well as the Electro Bolts. EMP Grenades oddly attach to a unit when they are thrown at one.