AMG Laser Sight
The Authority MG, or AMG for short, is a weapon featured in RAGE. This futuristic assault rifle is used by the Authority troops. Different parts of its design appear to be based on some of the FN Herstal "signature weapons" like the assault rifles F2000 and SCAR and P90 PDW. It appears that the Authority Machine Gun appears in the RAGE 2 Announce Trailer, and thus may be making an appearance in that game, as well.

The Authority Machine Gun has a built-in scope, which can be very useful while killing enemies at a distance (the scope, however, is strangely absent from the AMGs carried by NPCs). The AMG appears to have a very high rate of fire, but fired in short controlled bursts it is a highly effective medium to long range weapon. It has a 40 round magazine that is located above the barrel in a horizontal position. The gun will beep 3 times when it is almost empty, like several Doom 3 weapons.

The gun does a considerable amount of damage, being able to put down unarmored enemies quickly. The high rate of fire and magazine size makes short work of armored enemies at close range, however, the effectiveness against armored targets is lowered substantially at long range, since the gun will need to be fired in bursts preferably. When loaded with AV2x Rounds, it will easily chew through armor, and the AV2x ammo can even be found when looting the bodies of the Authority Enforcers. 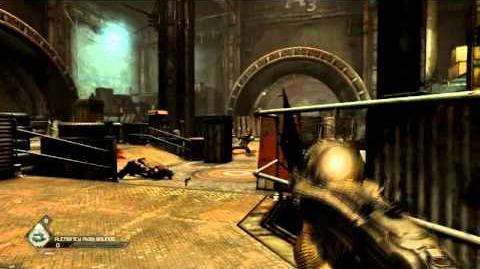 The AMG Laser Sight is a modification for the AMG that attaches a laser sight to the weapon. It is purchasable for $250 in the "Outfitters" and drastically improves the AMG's hipfire accuracy to nearly 100% at a medium distance, according to the crosshair.

An idle animation
Community content is available under CC-BY-SA unless otherwise noted.
Advertisement