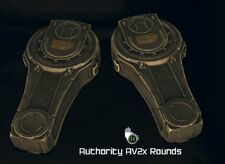 Authority AV2x Rounds are a type of ammunition featured in RAGE. It is used with the Authority Machine Gun.

With this ammo, the AMG does a considerable amount of damage and is now armor piercing, being able to put down both the unarmored and armored enemies quickly. It is much more useful against the heavily armored enemies such as Gearheads and the Authority infantrymen.

The AV2x Rounds magazine looks different from the AMG's default ammo type, the MG Rounds, because it's bulkier.