The Authority are the main antagonists of RAGE, as well as its sequel.

A highly organized and weaponized military force that controls and shapes the Wasteland in whatever way they see fit, the Authority is perhaps the most powerful faction in the Wasteland. Unlike the mutants and bandits that wander the Wasteland, the Authority knows exactly what it's doing. They use personal energy shields, recharging stations that refill their battery packs, and utilize cover and tactics.

Led by General Martin Cross, also known as the Visionary, the Authority's main purpose is to restore order to the world by any means necessary, including killing unmutated humans. The Authority seems to hold Some form of prejudice against Ark Survivors, ruthlessly seeking them out wherever they are to be found and taking them back to Capital Prime for unknown reasons. However, it is speculated (through the novel and a trailer) that the reason behind why the Authority abducts these individuals is to be found in their bodies:Nanotrites, implanted before the Impact of Apophis.

It is discovered that they have their origins within the United States military later in the campaign. On the night that 99942 Apophis hit, the last of the Arks, a massive "Super Ark" capable of holding hundreds of people, was taken over by a select team of soldiers led by General Martin Cross and Colonel James Casey. With its original residents left for dead, Cross altered the Arks programming, so that it would emerge in 2105, far ahead of any others. This set up Cross and his men so that they might shape the new world according to his vision.

The Authority enjoys an overwhelming edge in technology over any other faction in the game including but not limited to: dropships, jetpacks, energy shields, advanced firearms, and powered exoskeletons. On top of this, they appear to be constantly developing new technologies to supplement those already in use, making them a powerful force indeed.

The Authority tends to watch over towns that have no specific interest for it, and only makes an approach if it's required. All surveying is performed by Authority Drones, while soldiers are only found around (or inside) Authority installations and places of interest, like settlements that could possibly shelter Ark Survivors.

By 2165, during the events of RAGE 2, even though they remained the most powerful and technologically advanced force in the Wasteland, they had lost the war against the Resistance years earlier. Still led by Cross, now confined to a cybernetic body harness, the organisation had set its sights on hunting down any remaining Ark Survivors and reclaiming the empire they had lost. The Authority waged war against anyone who refused to submit to their rule and began their reestablishment of the New World soon after their attack on Vineland. But their plans were ultimately foiled by the last of the Vinelands rangers , Walker.[1]

After Nicholas Raine made emerge all underground Arks, the Authority Wars began. The newly emerged Ark Survivors joined the fight, and together, managed to defeat the Authority and (apparently) killing Cross. However, they were wrong, and the Authority simply had passed to the clandestinity, creating new technology and weapons. Cross itself not only was alive: he had even managed to become inmortal, thanks to cloned bodies, and had shared this gift with his few enforcers.

The Authority returned again in 2165, launching the devastating Assault on Vineland, in which they captured or killed the only force than can oppose them: the Rangers. Cross itself, now an horrific and powerful cyborg, lead the assault and personally executed the rangers leader, Erwina Prowley.

Their military is not composed of ragtag bandits or poorly trained local militia but professional soldiers who are the best trained, best equipped, deadliest and most disciplined fighting force in the Wasteland. They never panic, always follow orders and show no fear even in the face of impossible odds. They are without question the toughest human enemies in the entire game, each and every one of them is equipped with a suit of hi-tech battle armor packed with sophisticated electronics, and it takes nearly a full magazine from an Authority Machine Gun using standard issue rounds to kill an Enforcer, so the armor piercing rounds are a must. However their armor has a critical weakness: it has inadequate EMP shielding, making Authority troops the only humans in the game that are effected by EMP weaponry (although a single hit from one of these weapons will not kill them if they are at full health). The Combat Shotgun's pulse slugs are particularly effective as they are both armor piercing and EMP rounds. They often carry a wide array of loot including: EMP Grenades, MG Rounds, AV2x Rounds, pulse slugs and various ingredients and engineering items.

Enforcers are the bread and butter of the Authority's military, equipped with the deadly AMGs loaded with AV2x Rounds. These soldiers will mostly seek cover when engaged in combat, even hiding behind a Shield Guard, if one is nearby. If the protagonist stays too long in one place, Enforcers will begin throwing HE Grenades to flush him out. Though infrequent, some Enforcers will use EMP Grenades instead of the standard issue grenades.

At some locations these soldiers will be deployed via dropship, using jetpacks to slow their descent. If the player manages to shoot them before they land, the soldiers lose control of their jetpacks and will violently explode, resulting in an instant kill. (There is, unfortunately, no way to loot their bodies afterward.) This only happens in the Campaign and not in the Wasteland Legends. 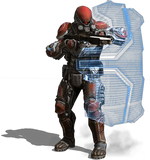 Equipped with an energy shield and a Combat Shotgun loaded with pulse slugs, these men will slowly walk towards the protagonist's position. The shield itself can be overwhelmed by a barrage of bullet fire, but it's especially vulnerable to EMP Grenades, Striker Crossbow Electro Bolts and shotgun pulse slugs. Nearly impervious to most weaponry, the shield has a small weak spot: the Shield Guard's arms are exposed allowing the use of shotguns. If the shield has dissipated, the Guard will, if possible, move to a glowing blue floor panel connected to an Authority Mobile Generator to recharge.

Sentry Bots and Sentry Turrets are good distractions. They will also focus his full attention on the position of a live grenade, allowing the player to shoot their backs.

Equipped with a Sniper Rifle and a laser sight, this military unit will shoot any hostiles within its visual sight. A good way of disposing this threat while at distance is shooting them with the Sniper Rifle, although flanking them whenever possible and/or using grenades while at close quarters might prove to be a better solution. Shooting snipers with Mind Control darts will cause them to instantly explode.

Note that it's possible to just pass the sniper at medium distance utilizing unpredictable movement trajectories and some careful jumping while they try to aim and shoot.

These fast and deadly creatures are the one successful breed of mutants totally under the control of the Authority. They are equipped with a pulse weapon and armor which makes them significantly harder to kill than common mutants.

Equipped with the Authority Pulse Cannons and advanced heavily armored exosuits (which are not affected by EMP weapons), these soldiers are some of the toughest human enemies encountered.

The best way to take them down is with heavy weapons like the shotguns or Rocket Launchers, Pulse Cannons or using armor piercing rounds. They behave much like the Shrouded Clan heavies, only they are tougher and better armed. Oddly enough, the bullet speed of their Pulse Cannons is somehow slower than the protagonist's Pulse Cannon. The player can easily dodge their projectiles by just moving sideways, making the Elite in some gamer opinions less lethal than the Shrouded or Gearhead Miniguns.

Authority Drones do not carry weapons but they act as the eyes and ears of the Authority. The Authority sends these drones out into the Wasteland and settlements, usually to look for Ark Survivors, and they also act as early warning systems, reporting any nearby Authority Enforcers the location of enemy.

They have a lot of health and it takes some ammunition to bring them down. Most of the time they escape and send reinforcements before the player can even kill one. (The Pulse Shot ammo may make the task easier.)

Predator is the vehicle type used by the Authority forces in the Wasteland. More sturdy than even the Monarch, the Predator is comparable to a tank, capable of devastating other vehicles with its Pulse Cannon. It is only encountered in the very late stages of the game in the Eastern Wasteland and the Authority Territory. The Predator is also weak against the Monarch's Pulse Cannon. This is a fast moving vehicle capable of moving quickly but in a sluggish turn.

They act as reinforcement deployment vehicles in that they fly around to areas where enemies have been detected and will drop a squad of Enforcers, Snipers, and Shield Guards to that location via jetpacks.

Dropships cannot be shot down.

The Authority was willing to manipulate and use other factions or people as pawns. The knowns are:

Concept of an Authority Enforcer by artist Ben Olson

Concept of an Authority Enforcer by artist Ben Olson

…and near Redstone's office 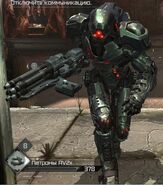 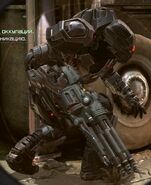 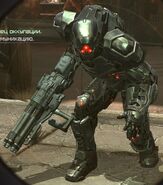 Two Authority Drones, outside Ark 437a

An Authority Elite, without his helmet 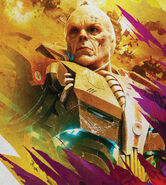