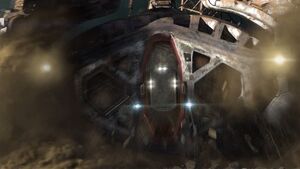 The Arks were large, technologically advanced shelters meant to safeguard a small portion of humanity in the event of an apocalyptic catastrophe, specifically the impact of the meteorite 99942 Apophis. When they opened after at least one hundred years underground, they would provide humanity with the hope of beginning anew after the destruction that would inevitably result from the Apophis strike.

Only a select few of the Earth's nations had Ark projects executed, and those were done with the utmost secrecy; many people having no knowledge of the project until it was far too late and the Arks were long buried underground. In the novel, America was said to have built well over a hundred, and it is heavily implied that more countries, such as France and China, had developed similar technology and were executing Ark projects of their own.

Each Ark site was provided with a high level of security: armed soldiers lined every corridor, tanks were entrenched all along their perimeters. The supervisors expected attacks from those who hadn't been among the chosen few selected to survive the coming apocalypse, and these precautions would prove to be well founded in the days to come.

The Ark residents came from all walks of life. Scientists from every field were the mainstay of those chosen, so that there would be no problem in the new world that couldn't be dissected and promptly solved, but also among these great minds were military men, there to teach future generations how to defend themselves and protect their fellow survivors. Destined to act as the leaders of each group of Ark Survivors, many of these soldiers had experienced the escalating brutality of the wars of the 21st century and were expected to conduct themselves in a similar evenhanded fashion in whatever world that was left after Apophis struck.

Each Ark was created to be fully automated, with a computer A.I. controlling all of the Ark's primary functions, including the date in which the Ark resurfaced. This program, although it seemed to not be a true A.I., only emulating one, was meant to provide a basic interface between an Ark survivor and the vast amounts of scientific and practical information contained within each Ark. A female voice was apparently chosen as it would be perceived as more comforting to Ark survivors upon reanimation.

The Arks are capable of burying and unearthing themselves when necessary. It is unknown precisely how deep Arks are buried. The core of an Ark, around the pods compartment, was an sphere-like one.

In the novel, Matthew Costello gives a descriptive rundown of the entire game, with definitions and great detailing on the Ark program and the Eden Project. Ark 437a was lowered into the ground by two maximum heavy duty military choppers. After the events of the strike on the Earth Ark 437a alerts Raine and awakens him in the midst of a damaging internal fire. Wearing a head piece with a face screen for breathing, Raine describes the Ark with sparking wiring, purplish smoke clouding the room and several heavily damaged cryogenic chambers. A large crack stops right next to his pod. The Ark in the novel is also two floors and holds different useful equipment and vital supplies that include tools, seeds, weapons, food, water, etc. Also in the novel the Ark emerges lop sided and Raine actually has a conversation with the onboard AI.

During the Prologue in the game Captain Stephen Hill can be heard speaking over a radio with Atlas Control (1138) following through the Ark procedures before Apophis hits. The Ark seals itself and it's occupants and then, once moved to a hidden location, is buried below the surface. Though even being below the surface, Apophis was so damaging to the planet that earthquakes shook up most of the Arks that lay in the ground. However, not all of the Arks were damaged because of the destruction wrought by Apophis. Some Arks were broke open before they went under by those who hadn't been chosen, their technologies ruined, the soldiers and Ark residents brutally murdered in misconceived acts of revenge.

At 9:30 AM of June 11th, 2114 (approx.) the protagonist is reanimated by the Ark 437a' computers and awakens to the Ark's A.I. and computer systems. It states that the Ark has been forced to resurface due to detection of pressure exceeding it's thresholds, as well as fires in some areas (presumably as a result of the Ark being breached), and prompts everybody inside to leave the Ark immediately. Unfortunately, the life support and cryogenic systems had sustained damage at some time during the century underground and the other Ark residents died in their pods. The only one to survive was the Omega 5 pod, which contained Nicholas Raine.

Eventually, the Resistance managed to hack the systems of all Arks still underground, and after using an Authority satellite, forced them to emerge at once. Since then, it appears that no more Arks remain buried.

After the war with the Authority, all known Arks remain empty but were used to storage vital supplies: weapons and Nanotrites for the Rangers. As they're closed, only they can open them. However, almost around every one asettlement had grow, to extract power from the Ark or because the settlers are attracted by the Ark's contents.

RAGE: After the Impact

Elizabeth's Ark being searched by bandits 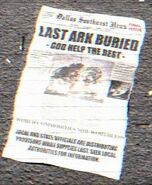