Kvasir's Lab
Resistance
Authority (formerly)
Doctor Anton Kvasir is a character featured in RAGE and RAGE 2. He is an old man living alone out in the wastes, specifically Kvasir's Chasm. He hides himself away in his home in one of the emerged Arks, surrounded by unusual traps of his own design, conducting his experiments. He seems to have an obsession about the 99942 Apophis, having numerous fragments of it scattered around in his lab.

Raine encountered him after being sent to his lab during the quest "Feltrite Sample" with a sample of Feltrite modified by the Shrouded. Kvasir discusses a few details of his past with the Authority working as a scientist for them on their mutant experiments. However, he escaped long before the calamity which caused the mutants to overrun the site, and thus never knew how close they got to succeeding in their aims. What he did know is that they had to pull out quick and that the secrets of what they did there may still remain hidden within the decaying ruins of Dead City.

He now works with the Resistance to create weapons that would give them the advantage in their struggle with the Authority. His main success with this would be the Mind Control Bolts for the Striker Crossbow.

Kvasir returns in RAGE 2, now as an older man. He sends Walker to the Eden Space Center to recall Eco-15 from orbit.[1]

A leading expert on Nanotrites and Feltrite, he was forced to work for the Authority. At first he resisted but they managed to "break" him through means unknown. During his time with the Authority, he met Elizabeth Cadence, an old friend of whom he worked with at the UAC. Elizabeth chastised him for working for the Authority and began an investigation into his work. She discovered that the Authority had forced him to work on prisoners that had been abducted from the wastelands for any excuse the Authority could think of.

During this time, Kvasir was overseeing a test. The test involved a small group of prisoner escapees trying to get away from a large band of mutants. This was a test to see if the mutants could work together against a deadly foe (in this case humans). He watched in horror as the mutants slaughtered the remaining prisoners. Upon amazement that not only were the mutants capable of working together, but setting up a trap as well for the prisoners, he ordered the mutants to be shut down. However, the staff hesitated to obey his order, for they were more loyal to the Authority then they were to him. He promptly left the test chamber and began planning his escape.

He helped his old friend by discretely loosening her binds when she was unconscious and bound for interrogation. Upon his departure, he was stopped by two guards who were subdued by Elizabeth. He then proceeded to release all of the mutants including his pet, the Giant Mutant he was working on. He knew that the Authority would be too busy trying to contain the outbreak to notice them, and he also knew that the number of mutants far outweighed the number of Authority personnel. Upon release, the mutants ran riot, wreaking havoc throughout the facility, and the Authority was unable to contain the outbreak due to the mutants' intelligence, strength, toughness and agility. The mutants quickly destroyed the facility and killed a large number of people who stood in their path. Elizabeth and Kvasir made their way to a hangar, hoping to find an automated aircraft to take them to safety; they found an aircraft but it was manual and thus they had to improvise.

Major James Casey, the Visionary's right hand, arrived with a number of soldiers. He figured out the two were responsible for the outbreak and the project's shutdown and ordered their execution. Their dropship was shot down leaving Kvasir blind and disabled, unable to feel his legs. Just when the Authority arrived to execute them, Kvasir's giant mutant pet arrived. Casey tried to order the beast to kill it's creator, but because of the fond memories of Kvasir's kindness and love, it refused and turned on Casey, killing him and his security guards. Several days later, Elizabeth and Kvasir had found their way to a town of Wellspring, and Kvasir had been fitted with his iconic sight drone. Kvasir left Wellspring to live in the desert in order "to be alone, for a very long time"; the signs of depression over the knowledge of his atrocities he committed were showing. 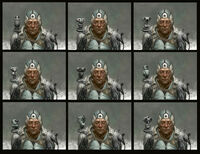 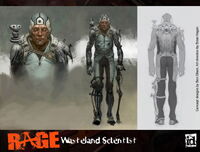