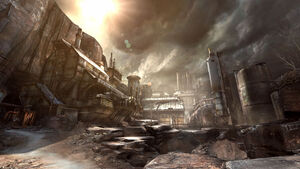 The abandoned distillery is a location featured in RAGE. It is located just outside the Subway Town gates, and accessible through a short cave system. Its systems are fully automated, making its operation extremely simple. However, its halls and tunnels are dark, dank, dusty and teeming with mutants, so close-quarter and silent ranged weapons and Wingsticks are a must.

The inside of the abandoned distillery bears some resemblance to the Dead City hospital. Narrow corridors and dark corners may hide prowling mutants, and several caches of useful items can be found throughout the building.

The structure itself is a haphazardly-assembled hulk of tin panels supported by a frame of steel beams and girders bolted together with two-inch rivets. Approximately two dozen stills are located in three distillery rooms; the main distillery room in the center of the building is home to several mutants.

As seen from the outside
Community content is available under CC-BY-SA unless otherwise noted.
Advertisement