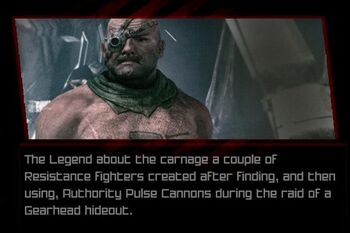 "A New Toy" is the ninth Wasteland Legends co-op mission in RAGE.

The mission's plot reveals how the Authority Pulse Cannon that Jack Portman gives to Nicholas Raine found its way to the Resistance Base in Subway Town.

The players start near the Gearhead Vault entrance. There is a Sentry Turret on the nearby shelves, a Wingstick a little further, and the first ammunition stash to the right of the stairs ahead.

There will be about half a dozen Gearheads up the stairs and a couple of Sentry Bots. The mission's first clownface collectible can be found on the driver's seat in a minivan not far from the stairs. A Gearhead Minigun will come from the upper level when the team advances to the far end of the parking lot, and a few ARs may stay there to try peppering the players while they pick up some useful loot in the area, including Pop Rockets and AV2x Rounds. There will be a couple of grenades up there, and some Fatboys in a wrecked car.

Mission will be updated as soon as the team reaches the ground level. There will be an ammo stash and some Bandages to the right of the bank's entrance blocked by fire gates, and another one in the bar to the left, along with some useful loot and the second collectible clownface to the left of the lift. About a dozen Gearheads will greet the team on the upper level, and an Armored Shotgun will come up in the lift when the fires will be disabled.

Once the team enters the bank, the fires behind the players will be enabled. There will be a couple of Gearheads in the area, and then about ten more of them that love to throw grenades will keep coming from the left. Finally a Gearhead Minigun will appear, and after he's defeated, the fire will be disabled.

When the players enter the offices, a fire gate will block the way back, and two heavies will appear. It's recommended to use the ammo stash available, split and utilize any cover possible while fighting the enemies. Once they are dealt with, there's only a single Club between the team and the vault.

The mission will be updated after the Pulse Cannons are taken, and a Gearhead Jet along with a few grunts will come through the wall behind the entrance to the vault. When the team leaves the vault area through the hole made by the Jet, four grunts will be waiting outside, and a few more will come up the stairs. It's best to deal with them quickly because four heavies are coming up both stairs, and two more along with some grunts will be approaching the area soon. When the epic battle is over and all the enemies are defeated, it's right time to pick up the third clownface collectible from behind the fallen statue's head near the beginning of the left stairs.

There will be another epic battle soon. The Authority troops will appear when the team enters the next area: one or two Shield Guards along with a Sniper which will position himself near the fire gates at first. Soon a dropship will break the glass ceiling and a few more troops will land, a Shield Guard and two Enforcers. Another dropship will appear in the far end of the area, and three more authority soldiers will land while an Elite will come through the fire gates. Then two or more Shield Guards, a few Enforcers and about ten Authority Mutants will come through the fire gates. When the battle is over, the mission will be over too. 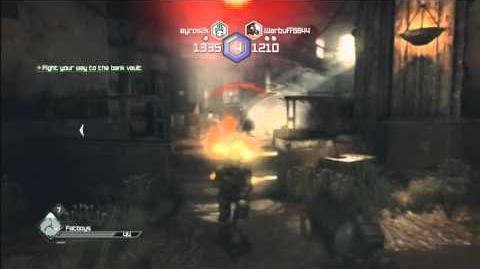 An Elite up close