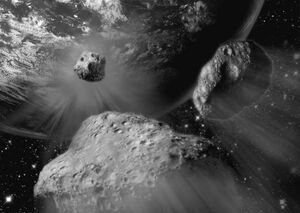 99942 "Apophis" or simply Apophis for short, was a gigantic meteorite that crashed into planet Earth in the December of 2029, destroying most of human civilization and drastically changing the very face of the planet.

According to the RAGE novel and the introduction cinematic of the game, Apophis grazed the Moon before hitting Earth, breaking into three large fragments and numerous smaller ones, each one "veering in slightly different directions." As a result, humanity wasn't completely wiped out as was previously predicted by scientists working on the Ark project. Thus, by 2112, Ark Survivors weren't the only ones emerging to begin settling the Wasteland. The Feltrite Crater is the result of a fragment of the meteorite hitting Earth. As Apophis contained a vast reserve of Feltrite inside it, and since Feltrite reacts violently with gravity, Feltrite may have been what triggered Apophis to veer off of its predicted path and onto a collision course with Earth.

Some fragments of Apophis appears to remain in orbit, as in 2165 meteorites continue falling to the Wasteland, all rich Feltrite deposits.